There was a time when I truly hated location broadcasts. I felt much more comfortable in the studio, behind the microphone--inside your radio, never seen. This was reflective of how I felt about myself for more than two decades, and it wasn't good.

When I started doing stand-up at over 500 pounds, I used the willingness to get up on stage in front of people as some sort of mental breakthrough, except I focused the majority of my material on making me the self-deprecating punchline. I remember rationalizing and twisting this into something positive, as in you've got to be able to laugh at yourself and never take yourself too seriously. There's some good truth to those, sure--but it doesn't mean it's okay to bully oneself with brutality while constantly projecting this low, beaten down self-image onto others...assuming they can't stand us as much as we can't stand ourselves, then ferociously trying to win their love with laughter or by whatever other means.

It was like begging: Please love me!!! The problem was, no matter how much love an audience showed, it was never enough to convince me of anything. And actually, they already loved me--from the second I walked on stage, but I couldn't recognize it because I didn't know what love was. I didn't love myself, I didn't accept and embrace me, so how could I recognize it from anyone else?? I was too busy projecting and assuming and then fighting against this loveless dynamic created exclusively in my own head. There's no finish line in that race for love, until we embrace ourselves--and then we stop running.

I'll never forget the occasional obese audience member approaching me after a show, pulling me aside and expressing how and why my material wasn't funny. They had watched the same routine, the one clearly working well with the majority, but with a different focus. They couldn't help but recognize the undercurrent of pain, most likely because they felt it too.

I love doing stand-up these days. It's a completely different experience for me. It's how I always wanted it to be--natural, calm, confident and fun. I love me, God loves me and if the audience loves me--bonus, if they don't--I love me, God loves me. And truly, that's all that matters. I'm not running. I'm not chasing adoration, instead--I'm exploring the authentic me. And that's really fun, actually!

By the way, this isn't a "lose weight and be happy--and love all around" kind of post. It doesn't work that way. Nope. I hit goal once before in November 2010--and I wasn't happy. And I didn't love me, the same as before. And therefore I couldn't truly recognize/translate any kind of love coming my way.

Often times, these explorations reveal more universal concepts, instead of being tied directly to a certain weight or body image.

I don't mind doing location broadcasts these days. I no longer try to hide in the broadcast vehicle. I get out, move around--get involved and excited. My job performance and overall effectiveness has multiplied by several times.

I had a location broadcast today from a grocery store. It was wildly successful. I'm enthused about what else I might accomplish since fully and authentically embracing this new perspective. 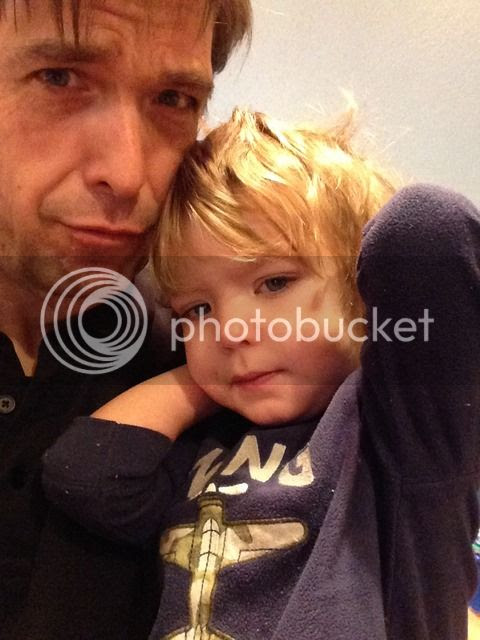 The cutest little guy in the world--right after waking. I love this look he's holding. We had a great time together. His Nana and Allen picked him up this afternoon for his visit at their place.

I made the time to prepare some really good food today. Nothing honors my plan and commitment more than devoting quality time in the service of taking extraordinary care. And speaking of...My workout tonight was exceptional. Level 20 elliptical cardio followed by strength training.

A couple of people have asked this question recently:

"Is everyone in your support groups sugar free?"

Not at all. I can see where that perception comes. But no, we're all different.
Several of our members make abstinence from refined sugar one of their daily goals. But it isn't a requirement of this group.

Not everyone is affected by sugar the same way. I'm abstinent because my experiences clearly demonstrated the bio-chemical reactions and the grip/cycle of addiction created by the substance. My brain is wired that way.

You may not have these same kind of effects!

When describing this point, I always mention a friend in successful recovery from alcohol. One drink--one sacrifice of his sobriety--and his life is dramatically affected. He has the experiences backing this up.

For me... not the same. I can casually have a drink if I so choose (I typically don't choose just because I don't feel compelled in that direction) and my experience has shown me--the only effects for me is a slight-temporary buzzed feeling. No further consequences for me. Not the same for my friend.

When it comes to sugar, the roles flip between us. Sugar doesn't trigger the addictive part of his brain.

This group is all about accountability and support for what you're doing and where you are. We honor each other's differences.


Appetizer as hold over to later dinner. Going in the oven... Oh my, going to be amazing! pic.twitter.com/5SCW4tBnCJ
— Sean Anderson (@SeanAAnderson) January 10, 2016