For most of us, I believe there are two different sides of resistance along this path we share. The food addiction side, where we hopefully identify a particular substance initiating the addictive reactions in our brain, and we apply sound recovery principals in that direction (mine is refined sugar). And then there's the emotional/stress eating side of our equation, where eating becomes in ineffective tool in our attempts to handle emotions and stress.

These two sides are not one in the same. And it's completely possible to be an emotional/stress eater and not a food addict. I know many who would fit the mold of someone who regularly handles stress and emotions in the nearest drive through, yet, they wouldn't be considered a food addict by its purest definition.

On the other hand, almost all of the people I know who are self-proclaimed food addicts, many in successful recovery, are also emotional/stress eaters.

Without a shred of doubt, I'm both.

For someone like me, any and all success ultimately takes a two pronged approach. I've written extensively about my abstinence from sugar and the life changing results it's gifted me, but that's not my focus tonight. My abstinence continues to be strong, sacred and non-negotiable.

My focus tonight is stress.

My stress level has increased exponentially over the last few weeks. Work stress, stress I'm creating as I make time to focus on personal and professional projects and various other personal things!--all contribute to this uneasy-unbalanced trek forward. And my oldest daughter is getting married at the end of May!

I'm on guard. If my resolve had a DEFCON number, five being smooth sailing and confident and one being extreme and imminent danger, I would say I'm at DEFCON 3.

Have I had thoughts of cutting loose on a binge in a foolish effort to somehow make everything better? Of course. That's been the pattern 85% of my life. I'm really good at it.

But we know the truth about emotional/stress eating. It doesn't fix anything. It's a detour into a state of pleasure where the troubles of the moment are not fixed, they're ignored. And when the plates are cleared, the troubles still exist, only now we have the added feelings of guilt and shame. Instead of fixing or at the very least, distracting us from the stress--it only serves to compound the stressful and emotional triggers. Any reasonable person can understand how this dynamic quickly becomes an out of control spiral.

Knowing the truth isn't the best defense. The truth can be ignored, for a while, at least.

The best defense is good support. Sharing what you're feeling--it's what I'm doing right now and the therapeutic benefits of writing it on the screen brings an immediate refresh and calm. Reaching out to support buddies--sending that text, making that call--it helps. It's working wonders for me at the moment. My calorie budget has remained solid throughout and it's certainly not because I'm some strong super-human weight loss machine. I'm not even close. I'm human and exceptionally experienced in all of the ways to go off the deep end.

I'm making a stand, my friend. I'm not taking that deep end dive. I'm reaching out for support instead. I'm writing about it in a way that was always the purest intent of this blog from day 1.

After a long day at the studio, I headed home with an unapologetic intention to nap well. Oh wow, I'm really good at napping, too. I handled my nap this afternoon like a champ.

I made it ten more minutes into Marc Maron's WTF podcast before I was gone. It's interesting, I started drifting when Marc started discussing his lifelong internal struggle with emotional/stressful eating, his dismissing it as largely circumstantial while on the road and the more damaging self-loathing he experiences every single time he does it.

I'll go back and give that a listen one more time. I love Maron. Not just because of my former career as a stand-up. That commonality is like a bonus feature for me to enjoy, especially when he's interviewing or speaking of someone I worked with along the way. I listen to him and I find myself relating to so many different aspects of his experience and psyche.

I woke feeling refreshed and ready for the second part of my day: A good meal, a good workout, some good support interactions and a good blog post. I feel better. 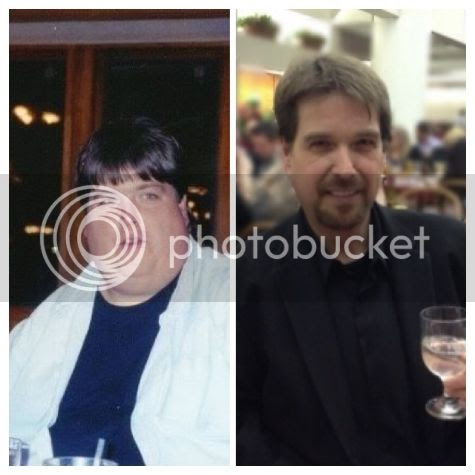 Before/During. I don't miss the facial hair, by the way. In fact, I'm totally embracing the daily shave required to keep it smooth. It's the strangest thing--apparently it's an age thing, because I don't remember needing to shave as often. One day and I get the shadow thing going...two to three days and I start looking incredibly sloppy. :)