It's been another long, but really good day. Very busy at work and Tuesday is my weekly teleconference night, followed by dinner and a good workout. I did all of those things today and tonight, and I feel great.

The topic of consistency has been on my mind the past few days and I've wanted to elaborate in writing, but haven't had the time. Tonight I remembered--a post from last October was all about consistency. I re-read it tonight and thought, why not run it again? A quick recap of today coming up--but first:

I believe we get what we give. The more we put into something, the more we get out of it. I want consistent results, so I give myself extraordinary care, consistently. It isn't always easy. It's certainly not as simple as saying. "I'm going to be consistent from here on out!" Don't we wish it were that easy?

As I analyze the fundamentals of what I've been doing in my recovery mode, I realize I've built a system that works for me. It's a system of accountability, support and open communication. In relapse, two of these three things were non-existent. I shut down my accountability and isolated, I may have communicated some, but not about my struggles. The support was always there, but largely ignored, by my own choosing, so it wasn't effective.

Being consistent during this turnaround from the regain has required me to elevate my accountability. My Twitter feed pictures of everything I eat has been an invaluable accountability tool. I was resistant to the idea at first, fearing it would be a huge hassle. It's actually a complete pleasure and it's inspired me to eat better! I take my time in choosing, preparing and eating my food. I enjoy it more--all because of this twitter feed. I've made it important.

I've recognized and accepted support in many forms. Your readership is support, your comments are support and I've established a list of people I know I can text or call anytime, night or day, if I'm needing someone to talk me through a tough time, or talk me out of a drive-through.

Open and honest communication--basically, the opposite of isolating, is crucial to my consistency. In the dark depths of relapse, nobody knew how bad it had become because I was alone when I did what I was doing with food. It was my secret trip to the ice cream place every night before bed. Nobody knew, not my daughters, mom or anyone close to me. I was consistently in "hiding."

Now, if those feelings/compulsions to binge show up--I pick up the phone and reach out for "spot support." Gerri Helms has been there for me on numerous occasions. And I have others who are ready if I need them. And I will, I'm sure--at some point. On the other hand--I'm also available for them, anytime.

Keeping things simple is a major part of the foundation making my consistency possible. I don't get too technical. I don't crunch the numbers or get into confusing plans or patterns. I simply eat as well as I can and desire and I make time for exercise. I have some personal food rules, of course: No sugar, I avoid trigger foods, measuring is very important and proper portion control is a must. I make sure I'm eating things I truly enjoy. And I'm not afraid to be repetitious in my selections, especially with breakfast and lunch. If I get tired of something, I'll naturally shift to other things. If I don't get tired of it and I enjoy it, then what's not good about that?

It's a natural evolution of good choices. Not a sudden and dramatic change where we expect to be a completely different person as soon as we wake up on our pre-determined start day.

My afternoon at work was a little longer, but for good reason. I was recording an interview via phone with the late George Harrison's sister, Louise Harrison. This is the second time I've had an opportunity to interview her, the first being an in-studio chat followed by lunch with Ms. Harrison. Considering what a huge Beatles fan I am--you can imagine how excited I was to stay a little late for another chat.

The tribute band she personally assembled, Liverpool Legends, are in concert this Saturday night at the theatre where our radio studios are located. She was promoting the concert of course and also her new book My Kid Brother's Band, AKA The Beatles! 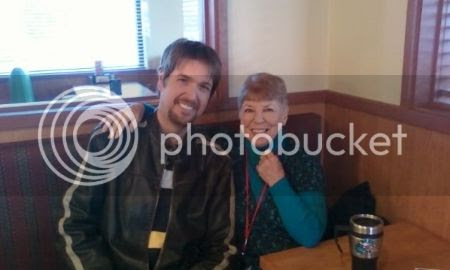 This picture was from almost four years ago (during maintenance period after my initial weight loss) with Louise Harrison. I was struck by her facial features, so much like George!

My pizza and pasta dinner tonight was over the top delicious. The size of the dinner was intentional after not making the time for a snack late afternoon. I've been consciously eating a little less earlier in order to get a snack between lunch and dinner. I don't think it's good for me to go six to eight hours without something. I was sitting at 800 calories without the snack and normally I'm around 1,000 right before dinner.

The sauce I used is a real find. If you have an Aldi grocery store where you live, chances are you can find it, too. It's a sugar free organic tomato basil sauce with the label "Simply Nature." At 35 calories per serving and only veggies and spices for ingredients, it's the best I've found for my tastes and my calorie budget. OH--and the even better part? It's $1.79 per jar.  Other sugar free sauces I've found run about double the calories and at least double the price, some triple the price or more. One of these days I'll put my Ninja blender to work and make my own. I'm just not sure I could get it as good as Simply Nature--and I know I couldn't make it for $1.79!

My workout tonight was extra sweaty. I think I've figured out why. It's not because I'm necessarily working any harder--nope, it's because of my recent haircut!! The thickness of my hair before this cut acted as a sweat band of sorts, absorbing most of the sweat. Now, with less hair--I'm using the towel much more frequently.