I woke up this morning feeling good about the day and where I've arrived along this road. I tried on some new shirts and really had to look a few times for a few minutes in the mirror. I'm truly size XL. This is such a big deal for me. 2X is too big? Really? Yes, really. The days of 5 and 6XL---and even flirting with 7XL are over. To be so comfortably into an XL and even fitting into a simple “L,” just blows me away. It's like I have to look in the mirror, take it off and check the tag, put it back on, look in the mirror---and repeat this insane process until my brain fully understands where we are. I smiled big when I found out that Kenz experienced the very same sensation today while shopping with her sister. These are the wonderful rewards of our consistent positive effort. The fruits of our labor, the NSV's that make this transformation road so much fun. Transformation Road---I like that.

I jumped up, had some coffee and a banana---and planned on cooking an omelet, when I realized there was a pressing issue waiting for me at the studio. I quickly made my way south to the radio station and fixed what needed fixing, then hurried home to fix an omelet that would serve as brunch.

My omelets are totally adjustable. I can make them as heavy or as low-cal as I desire and my calorie budget demands. It was approaching lunch time and all I had put in my body was coffee and a banana---so I decided to make this a 280 calorie omelet. I used two whole eggs and an egg white, 100 calories of mozzarella, mushrooms, tomatoes, green pepper, and avocado. It was an amazingly good omelet! I swear---I loved omelets before I ever started losing weight, but those omelets back then---oh my---loaded! I like the way I make them now, so much better because they don't hit my stomach like a ton of bricks.

I enjoyed my brunch and started thinking about my schedule. I needed to write and then get ready to MC the Juneteenth parade downtown at 4pm.

I started to wear a t-shirt/overshirt combo, but then I stopped and thought...hmmmm, what if I just put on this over-shirt and buttoned it up? It's scorching hot outside, why wear two shirts? And I'll look perfectly fine with one shirt---I will, dog-gone-it brain---you must get over this crazy irrational hang-up! I put on the shirt, buttoned it up and gazed into the mirror. It looks fine. Better than fine, at the risk of sounding boastful, it looked perfectly me. Not perfect, but perfectly me. Do you get it? I'm trying.

I arrived at the Juneteenth parade location to find a big stage in the middle of downtown with a single microphone in the center. That was my place. Behind the mic, on stage, in front of the parade participants and parade watchers. Any insecurities I might have felt, completely washed away when I noticed my reflection on the back wall of this elaborate city-owned stage. I looked completely thin and normal in that reflection. I didn't look fat. But wait---I'm still me, surely I must be looking at this reflection all wrong---nope, that was me. A few minutes later, a police officer on a bike rode up, smiled and said: “Sean Anderson, you're still looking incredible man.” Wow---such a nice thing for him to say, and I bet he has no idea how it gave me the added confidence to forget about the single shirt---embrace my new reflection, and do the best job I was there to do. It was a fantastic experience.

My constant self-image struggles may sound crazy after you look at my current “in-progress” pictures. But I hope you understand, these self-image struggles---I believe, are normal. I look nothing like I did at 505. I was near, at, or above 500 pounds for so long—it was me, and now---and now, well...I'm still me—but in a completely new and different body. OK—Maybe not completely new, but you know what I mean, right? There isn't a plastic surgery in the world that can give someone a transformation like this. But we have the power---you have the power to direct and own your very special transformation. And the brain---well, it takes some time to shift it's program. It's a powerful thing, the brain, but it slowly comes around, it does...and it's all good. Very good.

I traveled back in time to this date a year ago. I do this everyday---and sometimes I find helpful things and sometimes, like today---I find painful memories, that somehow make me smile now more than they make me want to cry. This is really an excerpt within an excerpt. From June 19th, 2009:

I've probably destroyed nearly a dozen or more chairs over the last twenty years. I'm lucky I never seriously hurt myself through all of the destruction! Out of all the chairs I've busted, this memory stands out as the worst chair breaking story I've ever experienced: From Day 8--- My worst chair story happened in the spring of 2003.

I was living in Los Angeles at the time doing stand-up 100%. One day I ran across a part time on-air opening at Westwood One Radio Networks. A part-time job there would pay about or a little more than full time salaries anywhere else I had ever worked. So needless to say I was excited about winning over this network program director! I sent in my material and what do you know, he called me! He was seriously considering hiring me! Or he wouldn't have called right? I was thrilled. I would be on the air all over the nation! “This could be big”, I thought.

The PD called me in for an interview the very next day. I drove to Valencia early to beat whatever traffic might get in the way, then after arriving an hour and a half early I took a long lunch at the Burger King down the road from Magic Mountain. When I finally arrived at Westwood One I was immediately given the grand tour of the facilities. Very nice. I mean, extremely nice studios. I was so impressed. The PD seemed very cool and I felt very comfortable, that is until I walked into his office for the interview.

I noticed right away his guest chairs were not “fat friendly”. Extremely narrow arms and that wood and hot glued look. The PD took his chair behind his desk and told me to have a seat. I was afraid he was going to expect me to sit down! So I did...as lightly as I could on the very edge of the chair...and about point 2 seconds later the chair crumbled under my weight. I quickly caught myself from falling by grabbing his desk, but the chair wasn't so lucky. And neither were my chances of getting that job. After I broke one of his chairs, he invited me to sit in the other chair that WAS IDENTICAL to the one I just broke!!! I did, the same way as before, but this time with as much weight on my feet against the floor. Lucky for me the second chair somehow survived. My interview didn't.

He never called me back. And I bet he tells that story to this day around the halls and studios of Westwood One Radio. Glad I could add some humor to their work place. There isn't a chair I can't sit in now, even the plastic patio white chairs are fine, I tried one not that long ago and it was a wonderful experience!

I wonder if Rick Santos is still the PD at Westwood One? Hmmm, interesting thought. I guarantee he'll never forget that interview. I'd like to see him again someday. He wouldn't believe the changes. Oh, and Rick---if by some crazy chance you're reading this---I would have been one of your best Oldies jocks ever...even at 500 pounds. Oh...and I hope Westwood One has finally given you the type of office furniture a network program director deserves! Seriously? You must admit, the chair was really low quality before I ever had a seat. ;)

I found myself trying to weasel out of a workout today. I caught myself rationalizing---trying to make myself feel better about just relaxing---and I stopped it. I hit the trail and pounded out a nice two miles this evening. It wasn't the greatest, but it was something. And tomorrow I'm doing a Fathers Day 5K at Boomer Lake in Stillwater with Courtney, Bradley, and maybe Amber and KL. That will be so awesome! 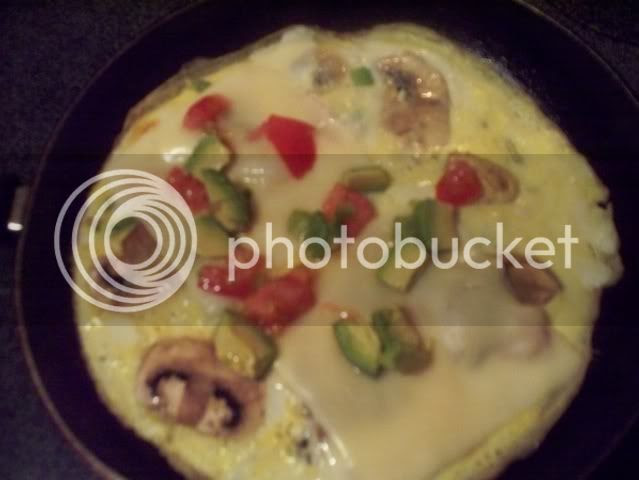 I need to buy a camera with image stabilization...a blurry picture of my omelet brunch. 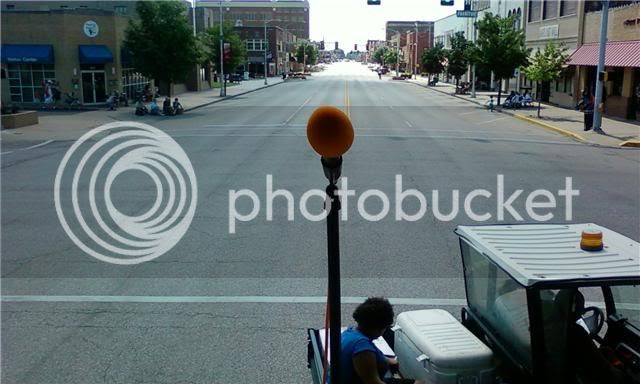 The microphone at today's Juneteenth Parade
Posted by Sean Anderson at 1:59 AM