The storms rolled in last night and I was activated, covering weather until the early morning hours. I have done this many times and still made it through my show from 6-9am. I knew before I left the studio, there wasn't any way I could come back and do a show. I was a zombie. I left a note for a colleague to cover my show and it was decided, I was at least taking a half a day--personal day, sick day--whatever we needed to call it, I needed it!

I slept until after 10am, got up and it felt like the weekend all over again. I slept well too. You know the kind of sleep where, maybe a handful of times a year you wake up and think--wow, that was the best, and you feel amazing?? It was that kind of rest. I'm only four and a half months removed from some of the worst sleep of my life and I can tell you, the first thing I do when I wake up feeling great is give thanks for this amazing blessing. If you've ever felt the frustration of severe untreated sleep apnea, where no matter how many hours you're in bed, you still look and feel completely exhausted--then you understand the joy of a good night of real, rejuvenating rest. Oh my--it's like you want to burst open your front door and prance through the neighborhood in your robe singing uplifting Disney songs. I've come close a few times.

I cooked a big hearty breakfast!!

I returned to work mid-afternoon for production and various duties. I made sure to pack some things for lunch. I left shortly before 5pm, ran a couple of errands, requested assistance in moving some exercise equipment into my apartment (more on this in a moment), thought about what to cook for a late dinner--threw a couple of dry seasoned chicken breast in the oven, wrapped in foil--changed clothes, headed to the store to get a few things I forgot last night, then to the YMCA for a good workout.

After the Y, the chicken was still cooking at home while I met Alan, my ex-wife Irene's boyfriend and KL, my oldest daughter Amber's boyfriend. Alan has a truck. They both graciously agreed to help me pick up some exercise equipment from a friend's house and transport it to my apartment--and help me get it up the stairs and into my spare bedroom (which is currently being used for storage). It was almost impossible. Almost...we made it up the stairs with a little help from the insanely strong MMA fighter dude that lives in the building adjacent to me. Okay-- we don't know if he's really an MMA fighter, but we're pretty sure he could be one, easily.

A very dear friend of mine surprised me about three or four months ago when he called to tell me he and his wife had agreed to gift me their big treadmill and Nordicflex weight training machine. They're moving away and they didn't want to take it with them. Rather than deal with the process of trying to sell them, they thought I would get a lot of good out of both and they wanted me to have them. Isn't that amazing? I've volunteered to help them move later this week. It's the least I can do to show my extreme appreciation.

I waited this long to pick up the machines because I wasn't sure I could have them in my upstairs apartment. After careful consideration for the downstairs neighbor, I figured out a plan to minimize the effects of the treadmill vibrations. I'm going to buy a horse stall pad at the local farm supply store. It's a large, hard foam pad--the perfect size to fit underneath the treadmill. It will absorb the vibrations. The NordicFlex isn't a problem, it doesn't move in a way that might cause noise downstairs. 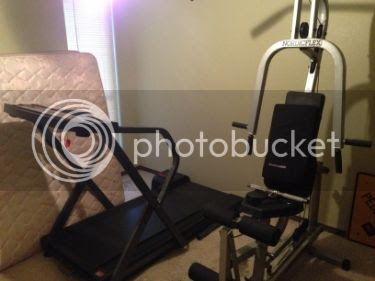 The decorating will soon begin--as I transform my spare bedroom from a storage room into a workout room! I'm already thinking of cool posters and other inspirational things I'll put on the wall!

The chicken enchilada crispy tacos were amazing tonight.  I ran short on my calories, so a little more than an hour and a half after dinner, I had another taco with a side of cantaloupe as my #lastfoodofday.


I'm continuing this trek back to a healthy weight with a new kind of stride. I welcome you to follow along on Facebook (www.facebook.com/seananderson505), Twitter (www.twitter.com/seanaanderson) and my username on MyFitnessPal is SeanAAnderson.

Thank you for reading,
Strength,
Sean
Posted by Sean Anderson at 11:59 PM