Day 575 Becoming What I Always Was On The Inside and Spinning--Round Two!

Becoming What I Always Was On The Inside and Spinning—Round Two!

It's funny, for someone that always said “I don't do challenges,” I'm sure noticing the benefits of the added accountability! And exchanging workout plans via e-mail with Shannon and posting those plans on this blog has really upped the accountability factor too! Accountability was one of the biggest factors in my decision to start this blog on Day 1, and I felt it too, but mainly to myself. I've said it many times, I'd be writing the same blog even if I knew nobody would read, ever. And it certainly felt like that for the first 200 or so days. This blog is my self-therapy, my escape route from morbid obesity, it's me learning about me while becoming on the outside what I always was on the inside. So staying true to my hopes and dreams—my passion to escape, was and still burns hot. With or without the accountability factor turned on high, I know I'll get there...but, well--now it's different.

Now, with added readers---the accountability factor, and the responsibility I feel to my family and friends here is just through the roof. And it feels great! By not posting specific workout plans, I was avoiding that accountability. Oh sure, I'd still workout---but it made it too easy to miss. Missing a workout was unheard of for me in the beginning, you know that if you've read the archives. But after 244 pounds lost, the urgency is gone---and I feel so good compared to what I did at 505---You don't even need to compare, I just feel incredible, period. I never thought I would reach the point where my commitment to working out would be lacking, after all, it's a major part of what's brought me this far. But it did. And just as this daily diary has educated and counseled me about me so many times along the way, it has done it again. I've learned that even I need a kick in the britches every now and then, and that's exactly what these challenges and the workout list is doing. Good stuff indeed! Thank you Clyde, Tammy, and Shannon, and everyone who reads this daily blog...You're support has been an amazing gift to me, and I can't thank you enough.

I received a text today from a new local friend who has just discovered my blog. She told me that she was running today on only two hours of sleep. Why? Because she started reading from Day 1 and didn't stop until Day 459! Wow...that was cool and horrible all at the same time! I sincerely appreciate the support, but don't short yourself sleep, this blog isn't going anywhere! Thank you for reading my friend!

My hope is very simple. When someone reads these writings, I want them to discover the simplistic approach and how it naturally evolves with good choices. I want them to understand they they have the power within to do it too. I want them to feel and experience the epiphanies that I've had the pleasure of having along the way. I want them to dig deep within themselves and find a hope and clarity that just might set them free, like it has me. I wish I could bottle this feeling—I wish I could take their hand along this road, but I know I can't. In the end, your success is all you and your choices. If this blog sparks some hope and clarity, that's a very small part of what it takes. The good news? You have all the other ingredients inside you. I can honestly, from the bottom of my heart say: After being near, at, or above 500 pounds for the better part of two decades, and feeling hopeless and failing at every turn---If I can somehow finally do it, despite every reason I ever let hold me back, still existing, then---you can do this too.

I came home for lunch today and within ten minutes, I had a beautiful lunch hot and ready, on the plate. I used the Foreman Grill for the peppered chicken breast and the microwave for the potato. I didn't have sour cream, but I did have butter---BUT---The butter is out of the question, it's just too bad of a calorie value. You know how easy it would be to have as many calories in butter as in my potato? Forget that! I used mild salsa instead. It was different, and provided the moisture I wanted on the potato---and it was tasty! I sliced up a fresh tomato to complete the quick and easy lunch. Ten minutes---and that's from a frozen breast! I love the George Foreman Grill!!

I walked in the door right at 2pm and decided it was nap time. I needed a nap today, I really did. My workout time was set, I needed to be at the YMCA no later than 5:15pm for a bike number in the spinning class, so I had plenty of time for a good afternoon snooze. I jumped up at 4pm and started getting ready, physically and mentally---for this workout.

Today would be a different instructor. And different could mean, more challenging! Oh my...I hope it's not too much harder!! I arrived at the Y and my bike number was drawn from the bag---Number 12! Yes!!!! This is the best number in the whole class as far as I'm concerned. It's on the back row in the corner! Perfect! I was so lucky! I then changed and decided to start the weight training before the class. It was then that I noticed people warming up on the cycles. Why would the be warming up twenty minutes early? Turns out, the class time was 5:30, not 5:45 like it's listed. Ooops! I was lucky to get a bike then, and oh my---look at the clock, I had five minutes before the class started!!!

It was incredible again. Very challenging, a little more than Friday's class. I was sweating and my pulse was racing within the first five minutes. Oh no...how am I going to make it 45 minutes? It was a challenge---a total meltdown, burning like a fire, but I couldn't stop. And there's no way I'm getting off the bike in the middle of class---no way! I had to do this! I made sure to stay on the proper gear too. I thought I was going to lose it when she barked out “SPRINT” on gear 16. Gear 16! A sprint? Seriously?? At the twenty minute mark, with twenty-five minutes remaining, I realized---this is a little tougher than my first. But I wasn't stopping. The sweat was flying, my clothes were wet, and I was feeling so wonderfully empowered. When it ended, the instructor told me “good job,” and asked if I would be back. My reply? “Oh yeah, absolutely!”

I took several minutes to rest, regain my composure, and think about my weight training routine. I was feeling like a fighter at this point, the endorphins were all over me---drugging me in the most wonderful way possible. I hit the weight machines and realized that the person who used them before me was apparently Lou Ferringo. Then I spotted him a few machines down the way. Yep---maybe not Lou, but this guy was at least a Dwayne Johnson (The Rock) in fitness level. His arms were huge! Oh someday, someday I'll be able to lift so much more---and my body will be built like that. OK, maybe not like that---I don't want to get too big, just nice and lean...with clear muscle definition. But enough day dreaming, we had lifting to do!

This Hulk guy had all the machines set on really high weights. I had to adjust them wayyyy down---just a little reminder of how far I have to go, but completely cool. Because I'm going to get there with a consistent positive effort! I was finished with the weight training shortly before 7pm. It was time to head home and cook dinner.

I planned on having chicken fajitas, but quickly realized I didn't have any flat breads to serve as tortillas. So I just grilled up the onions, peppers, and mushrooms---cooked the breast, topped it with a sixty calorie slice of white American cheese, then topped it with the veggies, and oh my...it was very different from my lunch---new set of flavors, it was so good! I decided that instead of the usual potato side (I had one of those at lunch), I would just make a fruit salad out of orange slices and a sliced up banana. It was wonderful! I know it really wasn't a salad, but I can call it that if I want! It was a fantastic meal that took me within 200 calories of my calorie allotment today. I'm eating some steel cut oats with cinnamon and brown sugar as I write this---bringing to a close a relatively perfect food and exercise day. I feel really good. 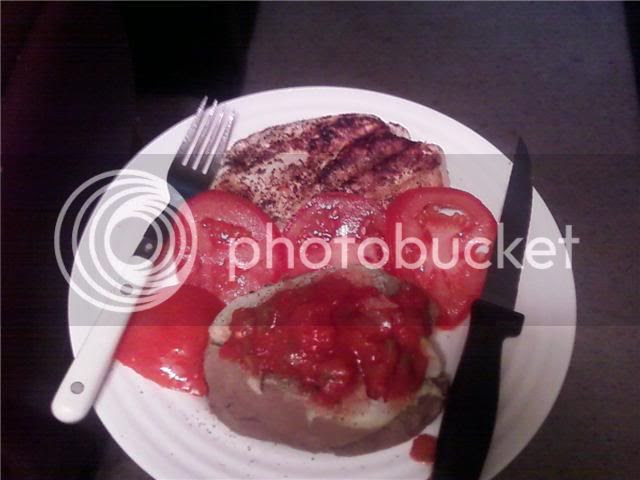 Lunch today! Salsa on the potato---I'd never done that before, but it was really good that way! 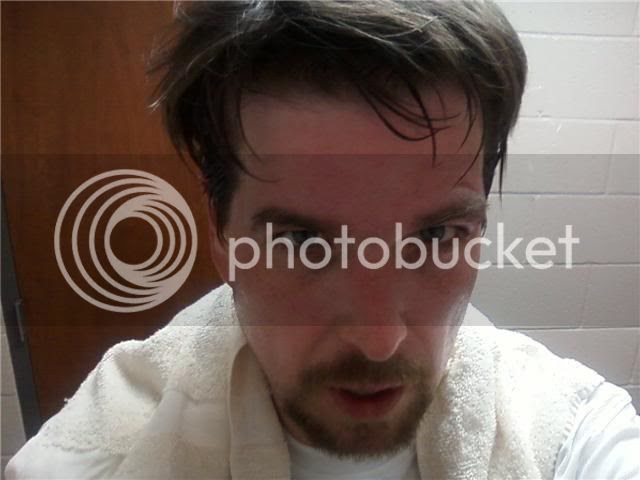 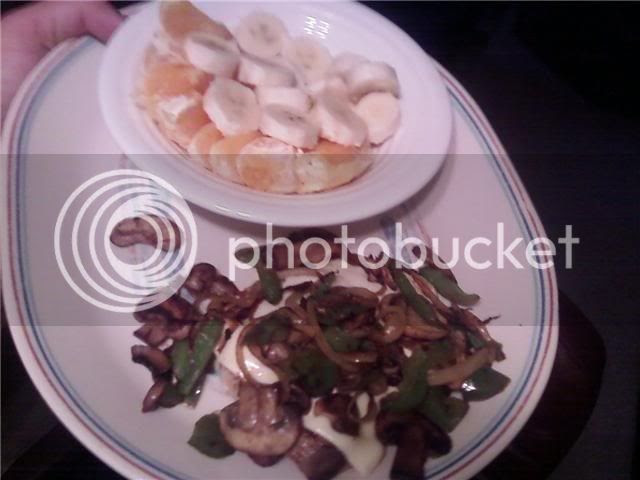