The red high heels from yesterday’s post were size 14. I wear a 12, but when I showed up for the event, all they had left were 11’s and 14’s. It was a great event and I got to keep the shoes. I’ll put them up for next year!

I spent the majority of the day thinking about the “Lose To Win” kick off event for Tuesday. I’m scheduled to speak to an auditorium full of people wanting to lose weight. I’m excited that the hospital has asked me to once again be a part of this program, and I really want to make sure I give them a powerful kick-off presentation. So far—it’s coming together nicely. My goal is to take each and every person in attendance through an entire range of emotions in 30 minutes, leaving them inspired and pumped to give the high importance level commitment this journey requires.

I’ve concentrated so much on this today I haven’t done much else. By the time 4pm rolled around, I had consumed a low 350 calories for the day. That’s not good for my metabolism. I grabbed a banana and an orange, enjoyed them---and headed for the trail for a 5K walk/jog. I didn’t jog one bit today. Nope, not even the slightest trot. It was simply a brisk walk. I figured out something---when I’m consumed in thought, it’s harder to jog. I can’t jog and think about anything other than jogging. But a brisk walk is easy, too easy for me really. But, it was a nice walk…nothing wrong with that. I hesitate to call it an official workout since I hardly broke a sweat.

My workout goals for this week are similar to last with a little tweaking here and there:

I decided to enjoy a burger and fries for dinner tonight. I bought the 96% lean hamburger with only 140 calories per 4-ounce portion. I used a half a slice of white American cheese for 30, mustard, onions, and tomatoes on a whole-wheat sandwich thin (100). I later realized that the sandwich thin bun was ok---but only saved me 10 calories from the regular bun I would normally use. I used the Foreman grill for the burger and the oven to bake a serving of steak fries for 130. I also used a tablespoon and a half of ketchup for 25 calories. The entire plate was comfortably under 500 calories. I didn’t read the April 25th edition from a year ago until after my burger and fries---It was strange. Exactly a year ago today, I prepared the very same meal:

Dinner tonight was homemade cheeseburgers and fries. Now before you start thinking that we’ve flipped out or something, let me explain. I made the burgers much smaller than I ever have before. These aren’t giant 500 calorie burgers. These burgers each weighed in at around 200 each for the patty, 110 for the bun, and less than 15 calories for the cheese. I made one slice of white American cheese go on all four burgers. I just ripped it in fourths! With Mustard and onions, we’re talking a real American homemade cheeseburger for 335 calories! And the fries? We bake them always. I had a hundred calories worth and a few bites of a leftover pasta dish we had on the table. My entire meal was just under 500 calories and I’m very cool with that number. Yes you can lose weight while still enjoying the all-American cheeseburger and fries every now and then! We sure do save money when we’re eating way less than before. The savings at the grocery store are fantastic. Tonight would have been much more expensive had we consumed what we were accustomed to before this journey. Oh, and nobody made fry sauce!

This weekend was not bad at all. It was a busy weekend, especially yesterday, but a fun experience. I’m excited about the upcoming week! Thank you for reading. Goodnight and… 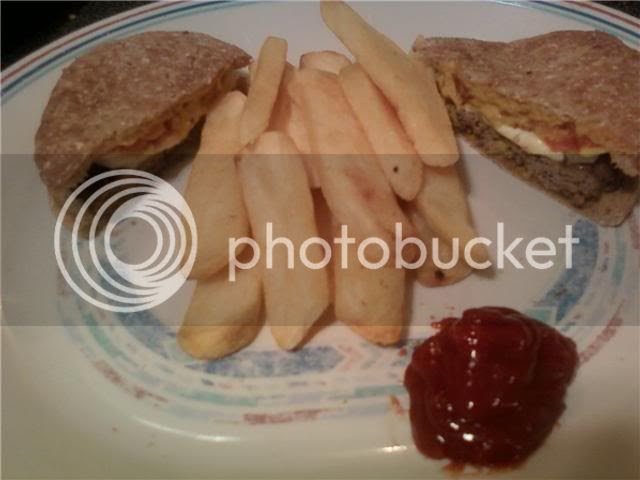 burger and fries meal tonight
Posted by Sean Anderson at 1:59 AM