If you were to go back into the archives, during weight loss mode--the turnaround from relapse/regain, you would have trouble finding a week where I didn't have at least five exercise sessions. Now, in maintenance mode, I've gradually dropped off my commitment instead of developing it further to meet my capabilities. I pride myself on having a very good measure of self-honesty--and honestly, this pattern runs parallel with the old "diet mentality" way of thinking. A perspective rooted in a temporary means to an end. Hit goal, embark on what's become a steady maintenance plan--then slowly drop the commitments along the way. Thank goodness I don't approach my daily disciplines with food in the same way. If I did, I'd be in big trouble.

But what if a slow commitment deterioration in one area influences other areas? It could happen!!

I do not settle for any lesser commitment with my food plan. I still eat the same way--only more in maintenance. When I wrote how maintenance mode would look very similar to weight loss mode, I wasn't just typing that on the page--when it comes to the fundamental elements of my plan-- I do it all the same, except for the extra 600 calories a day keeping me in a nice weight range--and most importantly, keeping me food sober.

So what can I do about it?

I'm making some changes. These changes started this morning. I'm starting very small and working my way up. The plan for me-- before coffee each morning, I must drink at least 1 cup of water and do a body weight strength training routine. It took me three minutes this morning. A cup of water and twenty push-ups. That's it. That's a start. The plan is to work up to 10-15 minutes and at least two cups of water, first thing--before coffee. The coffee is the reward.

Then, if I get in at least four good cardio workouts a week, great! And still--eventually working into other areas of weight training and cardio is the plan. I'd really like to return to spinning class soon--and the pool. I haven't done either in a year or more. Yeah, more, actually!!! Wow. Time flies, huh?

By the way, there are four spots remaining in the upcoming teleconference support groups! At one point we thought Monday was full--it turns out there's one spot left for Monday nights and three spots remaining for Tuesday nights. Here's the information---simply click the image to enlarge: 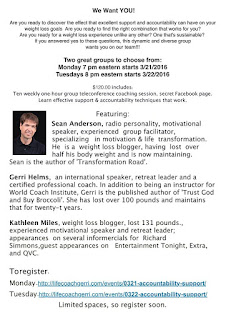 To register in the Tuesday night group, click here:
http://lifecoachgerri.com/events/0322-accountability-support/

Tomorrow morning is maintenance weigh-in day at the doctor's office. Then Thursday, I go for fasting blood work--a complete work up of all the important numbers. My follow up to the blood work will come next week. I'm looking forward to seeing how my numbers are getting along.


Okay-started very-very simple and easy on day 1 of the water/workout before coffee initiative. Push-ups-2 sets of 10. Took all of 3 minutes.
— Sean Anderson (@SeanAAnderson) March 15, 2016

Thank you for reading and your continued support,
Strength,
Sean
Posted by Sean Anderson at 11:46 PM