When I started this blog in 2008, I really didn't have a clue where it would lead. My only hope was that it would help me stay accountable and encourage me to dig a little deeper into the behaviors and issues keeping me over 500 pounds for so many years. It's certainly done this and a whole lot more.

Just when I thought it was over and the good from it was gone, I started a new chapter--and what was revealed throughout the process really changed everything for me.

I had a really good one on one support conversation today all about forgiving ourselves in order to move forward. For me, the constant self-loathing brutality I unleashed throughout my relapse/regain period had the potential to keep me in a down position for the rest of my life.

I found this excerpt from exactly two years and a day ago:
I've noticed a major positive difference since declaring to be more self-compassionate. The guilt and shame of regain is pretty much gone. I give an incredible amount of credit to the numerous people who have come forward, sharing their own stories of regain. Feelings of shame and guilt prefer to be alone for optimal growth. And because so many have shared with me their stories and their hope, I know I'm not alone, ever.

Getting back on track has been another big factor in alleviating the brutally abusive thoughts and resulting emotions. I know where I'm headed. And it feels good to be going in a positive direction. The hopeless feelings of a downward spiral always feel that way because of the decent. When we're back up and moving in a positive direction we suddenly realize there is hope after all.

This from my facebook post in March 2014:
I've heard from several people recently who have told me they're “starting over." First, realize you're not completely starting over. Now, you're armed with new information about yourself—some you may not have considered before now. Every “failed” weight loss attempt in my life wasn't a failure, it was a teacher. With this new perspective--approach with simplicity, confidence, and joy. And know: This time will be unlike any other because the focus is heavy on YOU and the real changes you desire,—the ones you once thought impossible...they're not, they're yours for the choosing."

Michael Prager, Author of "Fat Boy, Thin Man" commented:
"I start over every morning, regardless of how yesterday went. I only have today."

Isn't that the most wonderful perspective we can embrace? What if we let go of yesterday and fully embraced today? Now, if yesterday was awesome, then fine---but still, today is all we have. Truly, this is a one day at a time road we're traveling. 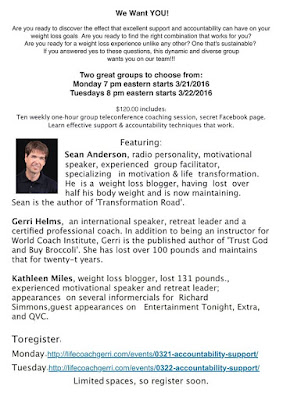 Are you ready to discover the difference strong accountability and support can make with your weight loss goals?
We have spaces available in our next 10 week support group teleconference sessions starting March 21st and 22nd. If you have any questions, please contact me directly via FB message or email: transformation.road@gmail.com

I'm hitting the pillow after a very productive day, at work, in support and on a special project I'm working on with a collaborator. Time to rest!