I'm going to do my best at a quick post on a weigh day night. I'll keep it short and save the analysis for another time. I suck at brevity. Let me explain in multi-layered detail... Jk'ing. Is it even appropriate to use a text message abbreviation in a blog post? Okay-- I'm getting off topic...

It was maintenance weigh-in day at the doctor's office this morning! This standing bi-weekly appointment with the scale gives me information that isn't as valuable individually as it is collectively. I've attached weigh day numbers all the way back to early-mid November for this reason. I'm looking for trends when I look at these numbers. And I don't see one. I see something I feel very blessed about and this makes me immensely grateful. I see a good fluctuation within a healthy range.

Coming from where I came--and not just the nearly twenty years near, at or above 500 pounds--but coming from a 164 pound relapse/regain--a place where I started to think I would never get here--never, ever, ever again---and to be living this experience, each day--oh my goodness. Every ounce of effort has been worth it in every way. I thank God for this seventh or eighth chance-- whatever the number is--I mean, really--I've had more than my fair share of chances. 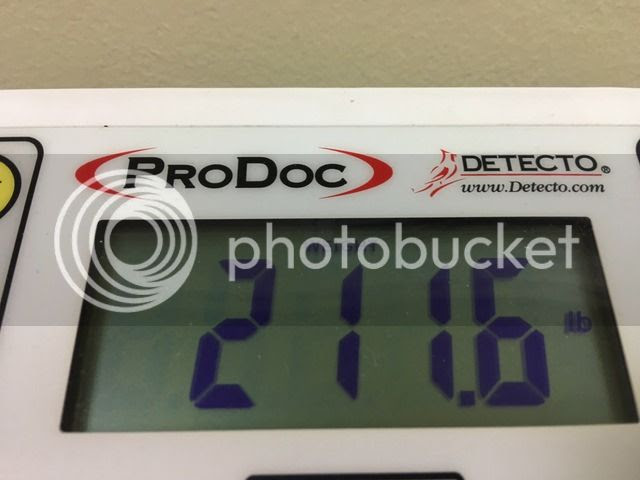 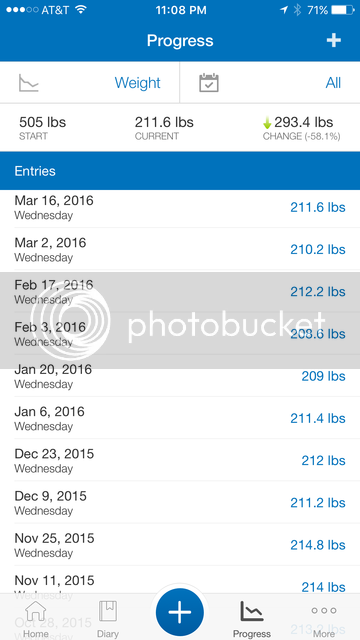 The range of numbers, collectively--give a more accurate representation than any one individual weigh-in.

Today was day 2 of my new morning routine! I'm making this thing fast and simple. I like simple. It's a wonderful start in a better direction with my overall physical fitness goals. Today was the same as yesterday...one cup water/twenty push-ups--before coffee. I'm down there--in the floor, listening to the coffee brew--and I want that coffee. The incentive inspires me to get it done and feel it.

I felt it this morning. The water--first thing in me, I felt it cooling my insides as it made its way down. And the push-ups warmed my arm muscles with circulation I could feel in a fine tuned kind of way. I noticed it very well this morning. It was a neat experience.

Speaking of feeling things...I woke from a nap this afternoon with a sore throat and an ear ache happening. My set plans to prepare a nice dinner at home and head to the gym for a workout were quickly scrapped in favor of an urgent care visit and dinner out, afterward. They tested for strep--nope, not strep... "might be viral," the doctor said..."You want a steroid shot?"

Kristin dropped by with water and she highly recommended the shot.

I don't like needles. I kind of turn into a big baby around needles. And now I'm going to do it in front of Kristin. I'm not proud of this--just saying, it's true...not a fan....at all. I agreed after a little encouragement. They give it in the behind. Did you know that? And guess what? They kind of just jam it in there real fast. I'd prefer a slower--more drawn out approach...maybe find a stretch mark (I have plenty of 'em) for a less painful entry? No--oh wow, you're done? Okay. Well, that wasn't so bad.

Speaking of bad. Did I mention I suck at brevity?


Good Wednesday morning! Good coffee with Three tablespoons half & half in my big cup- then another to-go. 120 cal. pic.twitter.com/fYxWRpkHrX
— Sean Anderson (@SeanAAnderson) March 16, 2016


2 cups water while waiting for the doc at the urgent care. Uhg. I don't have time for sore throats and ear aches!! pic.twitter.com/GrKVn2YeW8
— Sean Anderson (@SeanAAnderson) March 17, 2016


I do not have strep! It's something viral, maybe. Ears are fine. Was given a steroid shot. Wow, they just stab those in there, huh? #imababy
— Sean Anderson (@SeanAAnderson) March 17, 2016

Thank you for reading and your continued support,
Strength,
Sean
Posted by Sean Anderson at 11:58 PM