I woke up today with a very driven attitude. You know what I mean? Everything is clear, it’s been broken down into simple terms. We’re going to exercise and eat well. And we’re going to confidently march toward goal without a slack in the step. Last week was simply a disaster week in the workout department. It seemed that every opportunity was washed away by a circumstance. At least they were circumstances and not excuses…oh wait, maybe I did throw an excuse in there one of those days. Anyway---it’s behind us now.

The plan for this week is pretty simple:

Sunday--(already complete) 5.5 mile bike ride/weight training at YMCA
Monday--Spinning Class at 5:30pm and weight training at YMCA (different muscle groups)
Tuesday--Bike ride and 5K walk/jog
Wednesday--Weight Training and 5K
Thursday--Bike Ride
Friday---Spinning Class at 11:15am and weight training
Saturday---Maybe spinning---or swimming---That's what I'd really like to do...the water!!! But I have to drive 43 miles to get to the pool!!! It would be worth it, I know it would! Or Tennis---I've been talking about tennis for a while---I really need to call my tennis partner and actually do it.
Sunday---Rest Day

I enjoyed a giant 5 egg white omelet with mushrooms, green peppers, and salsa---no cheese. This behemoth of an omelet checked in at a ridiculously low 120 calories and gave me plenty of energy to get a great workout in today. I’ve designated Sunday as a rest day---but I just couldn’t today. I had to get out and move! I decided to ride the bike to the YMCA, do weight training, and then hop back on and ride home. That’s exactly what I did!

I had a strange experience on the way to the YMCA. I was lost in 80’s pop music when I looked behind me for traffic and noticed that a guy who looked rather angry was chasing me down. This can’t be good. His first words to me were “Hey, where did you get that bike?” I swear, I thought he was going to take a swing. His bike had been stolen the day before and he had his eye out for anyone riding on anything that looked like his bike. Lucky for me, he realized it wasn’t his bike and then proceeded to apologize for the bother. Close call! I really thought I was going to have to fight the guy for my bike. In case you haven’t figured it out, I’m not a fighter. I’ve never hit anyone in my life! Peace brother!

After my little confrontation, I made it to the YMCA---hot and sweaty from the ride, and warmed perfectly for some good lifting. I walked into the fitness center and whom did I find? My buddy Brandon was truckin’ along on the treadmill! He’s absolutely rocking this “Lose To Win” challenge---I don’t want to even say what he’s lost in the first two weeks---but it’s incredible. He’s so focused. We talked for a few minutes before I started the weights---and he kept on going. I finished my weight training and he was still going. I climbed back on the bike and started the tough ride back.

It is a tough ride back…with lots of hills. I made myself pedal---no matter what, I wasn’t stopping and walking the bike. I was at a snails pace at one point, ok, a couple of points---but I made it all the way home without stopping. I was so beat when I made it back, oh my---totally worked out completely. Felt good!

I prepared some chicken pizza burritos that just rocked. I used two whole wheat-low carb tortillas for 81 calories each, two 50 calorie slices of mozzarella, about 20 calories worth of tomato sauce, and a handful of mushrooms and green peppers. I used one medium sized chicken breast for 150 calories. I put the chicken on the Foreman Grill while I baked the tortillas with the sauce, cheese, and veggies like a pizza. I divided the chicken equally between the two tortillas---then rolled ‘em both up like burritos. Walla---Chicken Pizza Burritos!!! Incredible---and only 432 calories total!

I spent the later evening with Amber and KL. We watched “Back To The Future,” and enjoyed some low calorie homemade beef tacos for dinner.

Thank you for reading! Goodnight and… 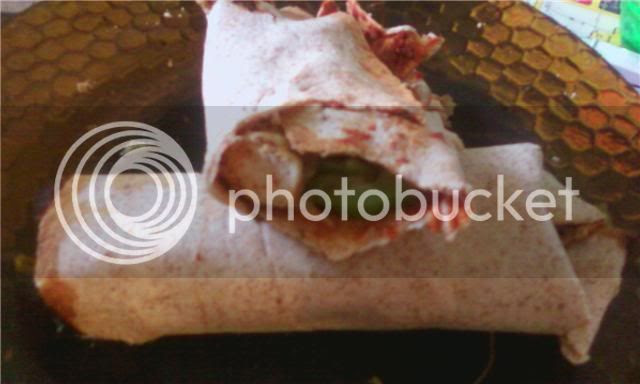