Day 620 A Long and Rewarding Friday, A Year Ago, And Look at My Ears!

A Long and Rewarding Friday, A Year Ago, And Look at My Ears!

I knew good and well this day would be busy, by work obligations mostly, then by choice later. I didn't hit the snooze button this morning, even though I set it for 3:50am, knowing that a one snooze would take me to 3:59...I had to jump up, because this day was going to need me making all the right moves in a timely fashion.

I started with making the coffee before hitting the floor for a quick morning warm-up routine. I must admit, even as simple as it is to just drop in the floor and do these movements, I sometimes just don't really feel like giving it my all. Today was like that. Why? Hmmm, don't know---because it's the most convenient part of my workout plan on any given day. Squats, sit-ups, push-ups---and I usually kick myself with a solid--- come on Sean, this will take 15 minutes tops, let's get it done! Unless I wake up late and need to rush to the studio, there really isn't a good reason to ever miss these non-weighted strength exercises. I did 'em good and hit the kitchen.

Breakfast was a couple of eggs in a low-cal whole wheat tortilla wrap. I'm out of mushrooms!!! How did I let that happen? I swear---I hardly ever run out---I grab some almost every time I'm at the store...but not the last time, and that was a mistake! Oh well...scrambled eggs with salsa---wrapped up with an 81 calorie edible container, made it 231 calories. I chose the wrap over the cheese today. I'm also out of pears---wow, I need to grocery shop. This wrap and a sliced pear on the side is right at or just a tad over 300 calories---and it's one of my favorite breakfast combos.

The schedule today was simple and full. My show from 6 to 9am, production from 9 to around 10:35 or 10:40, then racing to pay my electric bill (I need to learn to do these things online---geez) and off to my first remote at 11am. I ran into the city hall office to pay that bill today. Literally ran in and out---I mean running. Not a light “I'm in a hurry jog,” but a “let's see how fast this body can move,” kind of run. Being able to do that when needed---oh wow, and not be out of breath and almost dead after? That my friend is an amazing feeling.

My first broadcast of the day was at The Oklahoma Blood Institute. We were co-sponsoring a big blood drive with OBI and the Oklahoma Pork Council. Yes, pork. Each donor was given a pulled pork sandwich---including me. I made it myself---I wanted to be in control of the size. The bun was 120 calories, and I was very careful about the meat---guesstimating the sandwich at 250. It was a fair guesstimate, it actually was probably a little less.

I haven't donated blood in a while, so it was time---and today was the perfect opportunity. They took my vitals and I was thrilled with the numbers. My pulse was 60 and my blood pressure checked in at 120/78 ---I said, “That's pretty good, huh?” and the nurse replied, “It's perfect.” I haven't needed blood pressure medication in a very long time---I can't even begin to express how wonderful it feels to see numbers like this...120/78---a pulse of 60....I told a friend of mine about the numbers today and the reply was simply, “you've added years to your life.” Yes sir—absolutely! They'll be checking my cholesterol too, I'll get that in the mail in a couple of weeks or so.

I had a chance to see many listeners of my show at this broadcast---and the “wow” reactions started coming fast and furious. Every single one makes me beam with pride and confidence. My favorite was from a guy I haven't seen in well over a year: “My wife said you had lost some more weight, but I didn't expect you to look like a completely different person, good thing your voice hasn't changed.” Yeah, good thing! My voice and my heart of hearts---two things that remain the same, everything else is Sean 2.0!

I traveled back in time to a year ago today and found the following excerpts:

This morning was a little more routine. I woke up at 4:45 and felt the base of my sternum. I love feeling that. I never knew it existed before I lost the first 100 pounds! I mean I knew it was down there somewhere, but to see it stick out of my chest and feel the bump, that's really cool. It's amazing how many wonderful things like this I'm experiencing. When I look down I can actually see my feet! It's the most wonderful thing! After a few minutes marveling at my smaller body, I jumped up to greet the day. I know I only did it once, yesterday, but I kind of missed not walking this morning. I may try to do that at least a couple of times a week. I think I'll skip the iPod too for these early pre-dawn walks. I'll just soak up the sounds of the early morning scene. It'll give me time to think about where I've been and where I'm headed. I love working out to music, you may have read what I've written about that, but there's room for calm reflection and future gazing without the tunes every once in a while. Spending alone time with your thoughts can be very therapeutic.

Irene prepared a fantastic breakfast. I had a high fiber tortilla with a scrambled egg and salsa. Not bad for 150. I also had a serving of Cheerios with a quarter cup of 2% milk for 130. We're out of our steel cut oats, and I miss them horribly! I must buy some more tomorrow! If you're wondering what's so special about steel cut oats, Google it, and you'll see! Courtney calls them “Horse Oats,” because I told her it's what they feed race horses, and you've never seen a fat race horse, right? Horse oats are definitely on the shopping list tomorrow!

When I arrived at the studio, I was greeted by the morning personality at the country station down the hall. Him: “Hey, I had a horrible dream about you last night.” Me: “Really?” Him: “We were doing a broadcast from an elementary school and you died on the sidewalk.” Me: “Thanks for that.” Him: “You were all stiff and everything.” Me: “How long was I out there?” Him: “I don't know, I woke up.” Me: “Did somebody kill me?” Him: “Uh, I don't know how it happened, you were just dead.” Me: “I need a cup of coffee.” What a wonderful greeting to my workday. I haven't worried about dying in a very long time. I use to worry about it daily at over 500 pounds, but now I'm too focused on living and doing the things that will keep me living as long as I'm allowed. So all day long I had that lingering thought in my head. I tried to laugh it off, but it still bothered me a little. He didn't mean any harm by telling me about the dream, he was probably just happy to see me standing up, and not stiff on a sidewalk in front of a bunch of elementary school kids. I'm over it now. But really, it bothered me all day. On the way to the YMCA for my workout I thought about it again. Of course it didn't help that I had a voice mail from the friend meeting me for a heated racquetball match that said “I got a new racket, new balls, and you're gonna die in there.” Maybe that isn't an exact quote, but it was something to that effect. It was hardcore trash talking indeed. Now I was really worried. What if I exert myself a little too hard and collapse? OK enough! I had to wipe it from my mind. I did a little bit.

The first broadcast was 11am to 2pm, the second---from Wal-Mart, was 2 to 6pm---and after that I had some choices to make. I ended up accepting a poker playing invitation from friends. I know, it was crazy---because I was tired after a long day, but maybe I needed to wind down and enjoy some cards. I was the DD---and we played until just after 11pm. The better choice may have been---stay home, eat dinner, workout, and go to bed early. But I don't always make the better choice. But I do make it enough of the time to get the job done, and really---who's to say that relaxing with some friends and playing cards isn't the best choice after a long work day?
I've been feeling good the last couple of days. Staying busy and really appreciating the journey traveled and the lessons learned along the way. My goals are in sight. I'm strong, capable, smart, and very thankful for so many wonderful blessings.

I took a picture during my second broadcast from the drivers seat of our remote broadcast vehicle. You know what I look for in a good picture? My ears. I love seeing my ears---not hidden anymore behind my giant face. I look at those ears---and, well---I smile from ear to ear. A good day indeed. Not the best in some regards, but sometimes good is good enough. I'm happy. 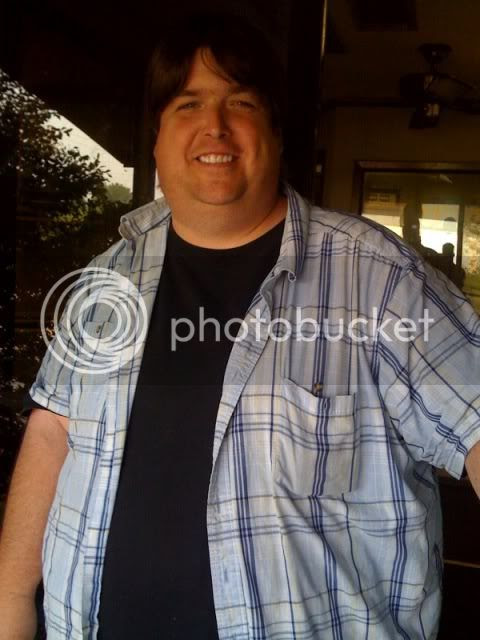 Where are my ears? One of my biggest before shots! 505 or maybe more! 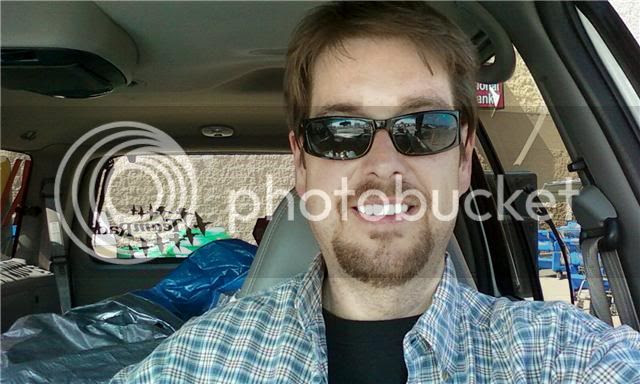 There they are! I like my ears showing...I'm strange, I know---but it's the little things that are so huge along this road. 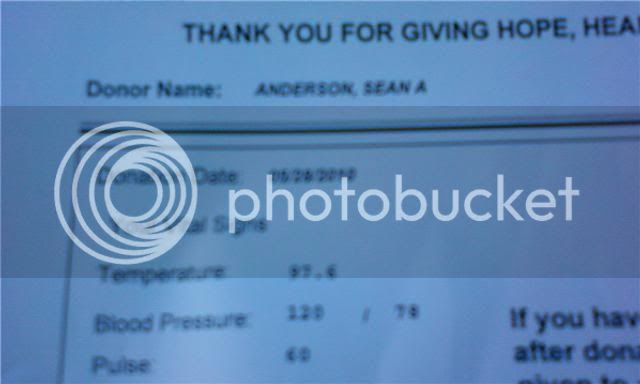