Day 629 Dad Departs and Flying Across The Water--Revisited & Re-Lived!

Dad Departs and Flying Across The Water—Revisited & Re-Lived!

We were in bed late last night and up early for dad's departure. It was an amazing week in so many ways. Dad couldn't say enough good things about everyone he had a chance to meet. We had a fantastic morning, just sipping coffee and talking, knowing that it was time to say goodbye until we see each other again. I really hope to make it down to Alabama sometime this year, that will be a very good trip too!

Dad's Vietnam Veteran hat hangs on my wall and always will. He also gave me his beautifully designed custom pool cue stick, some great advice, some precious pictures, and some memories from this week that will be with me forever. It was everything I hoped it would be and more...it really was.

Not long after dad headed out, I headed back to bed. I wasn't going to let a Saturday night/Sunday morning go with only four hours sleep, uh—no way! I was rather worried about dad, embarking on a 13 hour drive with very little rest, but he assured me he would be fine. He spent many years as a professional driver, he knows how to handle himself on the road! I slept until almost noon, resting from a good tired---in a wonderful way.

I prepared a nice little brunch of a banana, a 200 calorie mushroom and cheese omelet, and an orange---I know, strange—but it was so good! I enjoyed it all while writing and deciding on my next move.

I decided to see how the last year of weight loss has affected my enjoyment of jet-skiing. I had an invite to a friends private dock with a jet-ski ready and waiting. This was going to be fun! I'll never forget the day last summer when I climbed on that jet-ski for the first time. Here's an excerpt from Day 313---July 24th, 2009:

I flew like a bird today across the top of the water on Lake Ponca. It was one of my greatest experiences. I had never viewed the lake from that perspective. I always stayed on the shore and watched other people zip across the water as I sat miserable in the sun wondering what they must feel like to experience such freedom. I found out: They feel great. I was one of them today. The owner of Team Radio has invited me to his private dock to ride his Sea Doo jet ski no less than five times over the last month or so. Today I decided I would do it. Doing things like this that were once nearly impossible is one of the quickest ways for me to get really emotional about how far I've come in the last 313 days. This is what it's all about. It's living my friend. Really living. You know what I mean? Feeling that jet ski lift up and skimming across the water as the wind hurried through my hair was simply amazing. I felt like I could fly.

As I rode atop the surface I thought about how things have changed for me and continue to change. It would have been so easy to never have started on September 15th of last year. I did that my entire life. You know, think about starting, even plan starting, get excited about starting and then when the day would come (always a Monday for me), nothing but fear and giant overwhelming feelings of I can't, it's going to take too long, how am I going to do this under so much daily stress? It certainly wasn't that I didn't want it---Oh I did...but I was so busy trying to complicate the process, I couldn't get a handle on figuring out how to really do it. I always claimed “Oh, I know how to lose weight---just eat less and exercise more.” But there's more to it than that. Until I really analyzed the psychological part of the equation, I couldn't solve the problem no matter how bad I wanted it. This time is certainly like no other for me. It's the real deal my friend. The way out was found because I completely surrendered the dishonesty within, the excuses, and the rationalizations that always gave me reasons to fail. I decided to give this mission the importance level it deserves, so it wouldn't be easy to rationalize bad choices---because it's just too important. And here I am 313 days later, flying across the top of a lake, viewing a perspective reserved only for those who choose to live.

The differences today were dramatic. That life jacket that really didn't fit last year? Today, it zipped and buckled just like it was designed. I remember that day and how much confidence I carried on that dock---and now, it's even more. I decided to grab my phone and keep it in the water tight compartment while I rode, just in case I needed to make a call from the middle of the lake, or uh---make an “On The Go” video while I skimmed the water...I know, I know---very risky, I could have easily dropped it to the bottom, but I held tight and made it through the ride without hardly even getting wet. Well, at least not while riding. Let me explain:

I finished my incredible ride, parking the jet ski in the water just inside the slip of the dock, perfectly. I was bragging to my friend about barely getting wet as I stepped off and onto the dock. I had my cell phone in my hand and was feeling good, and then...I lost my balance somewhere between the jet-ski and the dock. This isn't a good place to do that. It was like a physical comedy—trying to prevent the fall with at least four nice saves---oh but the fifth---when I put my foot on the jet-ski, it pushed out, and I plunged into the lake---clothes and all. Wow, maybe I should have saved the “I'm barely wet” bragging for the patio furniture visit afterward. My reflexes must be cat-like, because I totally saved my phone by immediately extending my arm upward, with the phone firmly in my grasp---placing it safely on the dock as I fell below the surface. I was like a basketball player going for the dunk---I had to save the phone, and I did. My favorite sunglasses? Uh---yeah, they're resting comfortably on the bottom of the lake. I had so much fun losing those glasses!

But I just wasn't ready to let them go. They were the nicest sunglasses I'd ever owned, I was always aware, never leaving them mindlessly somewhere---I protected them. So I had to at least try to get them from the murky, snake infested, giant cat-fish crawling waters of Lake Ponca. I'm kidding, it's not that bad. But it is murky---and it is home to snakes and catfish, but really...they're more afraid of me than I am of them. And that's saying something, because I'm terrified of snakes.

I took off the form-fitting life jacket and took a deep breath for the dive below. You can't see in this water, I just had to power my way to the bottom and feel around. I made nearly a dozen attempts, actually touching the glasses on one dive. I just couldn't stay down long enough to get the job done. It was actually a really good workout and my neck, oh my neck---is so sore from the effort. Oh well, they'll be there, and one of these days I'll be there with some better swimmers than me. I'll offer up a little incentive for the treasure---and I bet I'll get the glasses back from the depths! How deep? Oh, not bad at the dock...maybe 8 to 10 feet. ;)

I had planned on a nice late evening bike ride, but after my power diving I was feeling completely drained. I'm looking forward to getting back into a more regular workout routine this week. I miss spinning! I'll be doing at least two classes in the next several days, I guarantee!

Snug, but fitting...same life jacket, much smaller me! I'm so happy! 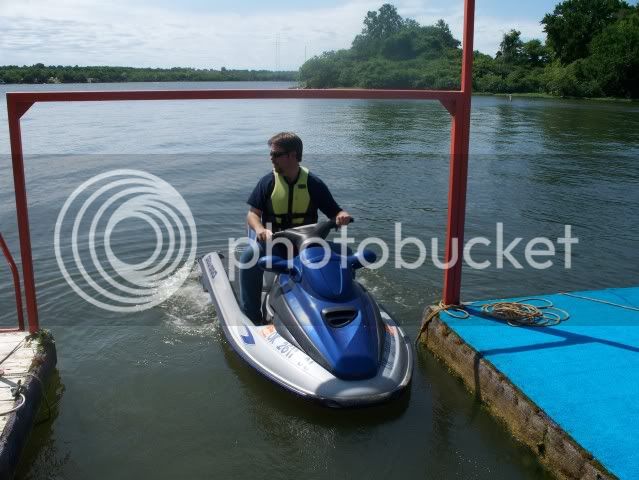 Taking it out on the water---or better: Approaching the runway, ready for flight!

Shockingly big before photo---Wow...I just ran across it again while finding the life jacket pic from last year---I just had to post a comparison...

I know, I know---I just posted this yesterday---But I did again to see the contrast from the above “before” picture. Somebody pinch me---I always dreamed of this transformation, and I have to say...this is one case where reality is better than my dream. And I'm not talking just physical---I'm talking about the really important stuff---the mental and emotional. I seriously had no idea how this journey from morbid obesity would positively transform me inside and out.


Come fly with me, will you? An “On The Go” Video without a single word.
Posted by Sean Anderson at 1:59 AM