Yesterday: I maintained the integrity of my maintenance calorie budget, I remained refined sugar-free, I exceeded my daily water goal, and I stayed well connected with exceptional support.

The learning never stops along this road unless we close our minds and turn off the sources of learning.

My trek back into maintenance mode over three years ago looked almost identical to what I was doing during the process of getting back to my healthiest body-weight. I was still making all the elements of my daily practice important: I was still maintaining a consistent and intentional exercise schedule, I was still weighing my body on a regular schedule (every two weeks, then every three weeks, eventually monthly, and then even fewer), and the only changes to my food plan was an increased calorie budget that, with trial and error, slowly made its way to where it felt right, 2,300 calories per day.

To me, the idea was to fashion a daily practice sustainable for long-term maintenance of a healthy body-weight. It worked very well. In the first year of maintenance, I enjoyed a tight fluctuation of fewer than five pounds. It was working! In fact, maintenance found me at my healthiest body weight of 203.4 on July 14th, 2016.

By that time, I'd already relaxed my weigh-ins to a month apart, sometimes a little more, actually--as I look back at the record in MyFitnessPal... But my commitment to every other area remained strong and important. By February 9th, 2017, my weight had crept up to 207.2 and feeling confident, I decided that regular weigh-ins weren't as important. By May 18th, 2017 I checked in at 209.4 and by Friday, September 8th, 2017, I weighed in at 211.

I remember being frustrated by this uptick from the previous low from almost a year and a half prior, but quietly and calmly, I checked myself--made sure my food plan was tight and my exercise schedule, that had absolutely declined a measure, was back in a good, consistent place. A month and a half later on October 20th of last year, I was 210.5. Okay--there, I thought.

In the year since that October 20th, 2017 weigh-in, I did two things: I stopped working out consistently in the name of a busy schedule and I decided to try living free from the scale. Why?? Let's get into that...

As a life-long compulsive overeater/food addict, my most important focus was and still is: Not compulsively overeating and maintaining my abstinence from refined sugar. In an effort to refine my relationship with my daily food plan, after nearly four years straight, I even stopped tweeting every single thing back in April.

The most important work wasn't the photos and tweeting (although I still take pictures of my meals), no. The most important work was not compulsively overeating and remaining abstinent from refined sugar while putting the food in its proper place. I've done that by staying connected with exceptional support and maintaining a daily practice with my well-defined food plan.

However, this daily practice must be more than just a food plan. Without a consistent workout schedule, while still maintaining a 2,300 calorie per day budget, my weight has slowly crept up the scale. Since I've been living scale-free for the last year, I was largely oblivious to the creep until the last few months. That's when I really started noticing my clothes becoming a little tighter. I also started noticing subtle differences in my face and body.

These things alarmed me but rather than stepping on the scale to check in with my body, I decided to simply recommit to a consistent exercise schedule. The thing is, doing that takes a plan of action--just saying it doesn't make it happen. Buying a Fitbit doesn't make it happen. What encourages changes more than anything: Getting face to face with the truth, facing reality, and refining the approach based on the information. What doesn't encourage changes is ignoring the truth and beating myself up. Creating and entertaining incredible amounts of negative head chatter only serves to hold me down and back from moving forward in positive ways.

Yesterday's trip to the doctor was necessary and very important to me and my continued recovery. I didn't like what I saw staring back at me, but I'm glad to be here, in the mindset and perspective needed for positive action. 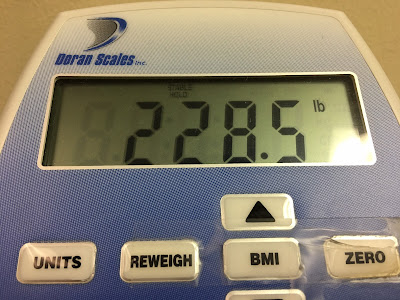 This weigh-in represents an eighteen pound gain over the last year. A slow creep of 1.5 pounds per month adds up. Again, I've noticed it over the last few months. Eighteen pounds makes a big difference when you're at a relatively healthy body weight.

After consulting with support contacts, I'm not getting crazy. I will continue my food plan with a lower budget window between 1,800 and 2000 calories per day and now, with a greater importance level, I'll proceed in getting back into a consistent and intentional exercise routine. I do not need to chase the scale. Tightening up the approach covers all areas--food, exercise, spiritual time, and doing better at getting enough rest. Taking this approach will, very much as a side-effect, return me to what I consider to be my healthiest weight.

Following the direction of those with experience well beyond mine, I'm simply refining my approach, staying a little more connected with support, enjoying my food plan with a slightly smaller budget, and of course, I'm immediately reinstating bi-weekly weigh-ins at the doctor's office.

Okay-- this will be fun! Stay tuned, my friend.

Thank you for reading and your continued support,
Strength,
Sean
Posted by Sean Anderson at 5:37 AM