Today was a very good day. After three days in a row without a workout, I broke that pattern by getting my tail into the YMCA  this afternoon and working it! It felt amazing. Earlier in the day, I posted about my Y intention in the private weekly conference call Facebook group page. It was an accountability/support maneuver, and it worked perfectly. It felt wonderful to post the "I did it" follow up comment!

Today was Mom's birthday. I called to wish her a happy 70th birthday. She's not liking the number seventy, but I've assured her, if she keeps taking exceptional care like she has been of late, the 70's could be some amazing years! She's doing very well and that is a fantastic thing. I'm so proud. I love you mom!!! The two of us will celebrate her birthday this coming Sunday.

I booked a private stand-up gig for Saturday night. I'm excited! This play I'm in and the opportunity to stretch my stand-up comedy muscles are both on my list of things that bring me joy. 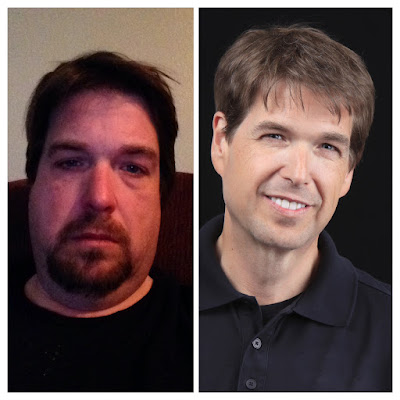 #TBT Today's Throw-Back Thursday picture is another "Then and Now" side-by-side. The photo on the left was January of last year, near the top of my relapse/regain. I couldn't breathe at night because I was suffering from raging sleep apnea. I was very unstable and inconsistent in my efforts to stop the regain/relapse. That's the face of a very depressed and distressed man who was severely unhappy about how things were going. I was also scared that I might not ever be able to turn the relapse/regain around. It became very dark in that world.  The photo on the right came from my new headshots photo shoot, earlier this week. I must have had an inkling of thought in mind to turn it all around--because I can't, for the life of me, figure out why I snapped the "then" photo--if not to be used at a later date in comparison to healthier photos I was hoping and praying to take one day. Hopes and prayers, answered.

I had a fantastic night at play rehearsal. I'm finally 100% "off book," as they say. I have sixty lines in the play--not the most, by far, but still, for me--quite a bit!! I had twice as many to memorize in Call Me Henry five years ago. Still, I was really worried I wouldn't be able to do it again--such a relief to prove those fears irrational.

Interesting...I had the same worry about losing the regain weight. What if I can't do it again? That was a very big fear. It's been such a relief to prove wrong those irrational fears.

I hit all of my goals today. I'm hitting the pillow with that fantastic feeling that comes from knowing the integrity of my fundamental elements of recovery was solid. I'll do my best to do it again, tomorrow.


This will be consumed later during the course of rehearsal. Milk & apple are fake. Banana & 21g almonds. 230 cal. pic.twitter.com/URYdHw8b2I
— Sean Anderson (@SeanAAnderson) July 10, 2015


This is totally happening. Luckily, it doesn't keep me from sleeping. A relaxing cup after a long day. SF hzlnt. 30C pic.twitter.com/dIXMDShSA3
— Sean Anderson (@SeanAAnderson) July 10, 2015