Wednesday, Thursday and Friday were very challenging days. The Oklahoma Association of Broadcasters Convention is something I really look forward to attending for many reasons. I've invested twenty-seven years of my life to this broadcasting career and it's very cool to interact and exchange ideas with other like minded and experienced individuals.

I survived with the integrity of my plan intact at the end of each day--and this is not because I'm some kind of superman, Lord knows I'm not. I'm just like any of us--at risk; vulnerable to a multitude of pitfalls along the way. Taking each day and assessing the challenges--then strengthening the plan against those challenges, has been key in making it through.

For me, it all starts with a non-negotiable stance on certain things. Maintaining the integrity of my maintenance calorie budget, remaining abstinent from refined sugar, drinking a minimum of 64oz water and staying in contact with support friends each day--are all imperative non-negotiable elements. So there-- that's the foundation I'm starting from each day. Then it goes something like this-

Okay-- here's the crazy schedule-And instead of immediately throwing up my hands and finding one hundred reasons why the plan can't work (I was once REALLY good at doing this--and if given the chance, I'm sure I'd be an ace at doing it again!), I'm left with a perspective grounded in finding solutions. Because if I immediately start identifying ways it can't work--I'll convince myself quickly--and then, I'm in serious trouble.

I have a 164 pound relapse/regain along my path's history--I know about those troubles--and I remember how it started, too.

Traveling, staying away from home, attending large meals planned by other people, eating in restaurants, adjusting to off-center schedules--it's all enough to overwhelm if the perspective is tilted toward negative thoughts. In my experience, those negative thoughts and subsequent actions/choices actually compound the overwhelming feelings--because now we're wrapping it all in a big layer of disappointment, guilt, shame and other feelings that work to push us down even further.

Taking a proactive approach in planning for success feels great--and with each positive move, it becomes increasingly empowering.

The craziness started Wednesday evening with a trip to Tulsa in advance of the conference. My day looked like it would allow a nap and an early dinner prior to departing--but then storms rolled in and that extended my workday because of on-air weather coverage. I was left with some choices--Eat a late dinner out, in Tulsa-- or pack what I need and take it with me.

I packed my "sack lunch" dinner and enjoyed it upon arrival and before returning home for a short Thursday morning and return trip to the conference.

In the craziness of the schedule--I forgot to pick up eggs--so Thursday morning started with a different kind of breakfast--still on plan, but without eggs. You could count on one hand how many mornings I've missed eating eggs in the last two years. Thursday was crazy hectic--and I still didn't accomplish all I needed to accomplish before heading over to the conference an hour and a half later than planned. I did make it--and by the time Thursday evening's dinner rolled around, I was hungry. But--uhg...

The buffet line had very few things that fit my plan. I was confident it would be easy to navigate--but with sugar laden sauce on every entree item, I was out of luck. I asked to speak to the chef, politely asking for a sugar-free alternative and he cheerfully accommodated my request.

After the dinner, I competed in the OAB Play Chip Poker Tournament for bragging rights--and oh my goodness, it couldn't have ended any better...well, unless I had won. Out of 50 or 60 players, the final two was the owner of the broadcasting company I call home--and me. It was a showdown with the man who signs my paycheck. I really wanted to beat him. But the blinds got too big, too fast--and it only took a few hands into head to head play for him to claim the victory. This story really hasn't much to do with maintaining the integrity of my plan--it's simply a fun story.

My calorie count was super low after what turned out to be a lighter dinner--so I decided on a late omelet-and it was perfect--because dinner started wearing off early--and I had the calorie budget remaining.

At Friday's luncheon--I arrived in time to speak directly with the chef about the ingredients used in preparation. It took all of two or three minutes to confirm the meal's refined sugar-free status (minus dessert and rolls, of course) and I could enjoy lunch without inadvertently sacrificing the boundaries I work to maintain each day.

The same scenario played out at Friday night's annual awards banquet. I met with the chef--same one from Thursday night--and he went through each item, confirming sugar-free status (again--minus the obvious-dessert and rolls).

My big takeaway: If I politely ask for what I need, nine times out of ten, I'll get what I need--even if it's simply peace of mind in knowing that a meal qualifies within my plan.

It was never a bother. It was never awkward. It was perfectly fine. My maintenance plan is that important to me, because again--I've lived the alternative, in times when I didn't make it important.

I'm not willing to trade the peace, clarity and stability my maintenance plan provides--and anything less would have been making that transaction. And for what?

Because for me, trading my food sobriety away would have been much more than simply two or three days off plan--it would have started the ball rolling on a complete unraveling into chaos. That's not a guess. I'm a stress/emotional eater and a first class food addict with addictive behaviors triggered by refined sugar--so it's a fact. And had I allowed it--or if I ever allow it, I may not make it back again. That's the sobering reality.

It is by God's grace I made it back from a one hundred sixty-four pound relapse/regain. I hope and pray I don't ever try my luck and take those chances again.

My support and accountability consisted of mainly spot support interactions via text messages with a few support friends. I reached out for support from some--and some reached out to me for their support. And when we do that, we're effectively/figuratively holding one another's hand and making it through, together. 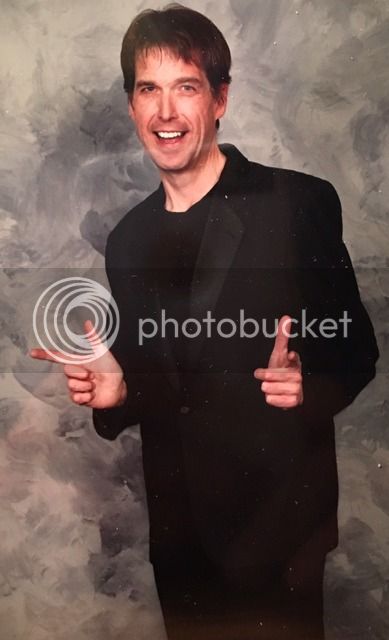 There's a professional photographer at the awards banquet every year. This was my "pistols firing" pose Friday night!

This photo with my award winning colleague, Ryan Diamond, was taken several years ago at the OAB Convention in Oklahoma City. This full body shot was one of my heaviest. I have no idea how much I weighed--but I know for certain, it was in excess of 500 pounds.

It's hard to believe that this photo was only two short years ago. I picked up an award that night for best radio weather coverage--and I knew, all award recipients were expected to pose with theirs--and I tried my best to avoid it--I did, but I couldn't escape the camera. I didn't like facing what turned out to be the very top of my relapse/regain period--394 pounds, but I'm glad I did.

In the middle of that relapse/regain period--it felt like the worst thing ever. But as I've said many times, I needed humbling--I needed to learn some things about myself that I likely wouldn't have learned any other way. I had to experience it the hard way in order to be where I am today.

And I sincerely appreciate where I am today. And I protect it by giving my plan the reverence it deserves each day--one day at a time. It's never guaranteed. But my best chance at continued success is found in the high importance level I apply in maintaining the integrity of this plan that fits me best.
------------------------------------------------
Today started with my morning routine after a short night of sleep--and then a 10am-1pm location broadcast for a home-builder. The remainder of the day was dedicated to rest and relaxation. I plan on doing more of the same tomorrow. More details on this day can be discovered in the Live-Tweet stream.


Three tablespoons half & half in my Saturday morning dark roast. This and a refill to go. 120 cal. pic.twitter.com/TTTSrzcXOT
— Sean Anderson (@SeanAAnderson) April 2, 2016