August 10th, 2015 The Encouragement of A Photograph

August 10th, 2015 The Encouragement of A Photograph

This 100 Pictures challenge suggested by Chris in the comments section of the recent weigh-day post, is proving to be very effective. My brain doesn't perceive me to be 500 pounds anymore, but it certainly doesn't see me as I am. This psychological exercise of mental images is profound.

At my heaviest it was exactly the opposite. The mental image I had of myself was always much smaller than reality. That's why I hated pictures so much. The pictures always debunked the image I held, an image that made it a little easier to remain where I was at over 500 pounds. I can't count how many failed weight loss attempts I launched based on the encouragement of a photograph.

I'm in a position now where I must recognize my smaller self, debunking the slightly larger image my brain insists is correct. The goal of this exercise is to assist in my transition from weight loss mode into maintenance mode. It's a transition that requires increased calories/nutrition, especially as my physical activity and fitness level increases and that's not an easy thing to accept.

My turnaround from relapse and a 164 pound regain has me firmly in recovery mode. It's more than a mode, it is and I pray will forever be, my way of life. Adjusting the sensors of my internal "excessive consumption alarm" is imperative in order for me to find the balance I need moving forward.

I had a good day at work. I prepared breakfast and lunch in the studio's employee kitchen, with things I planned, packed and brought from home. This daily planning and follow through is essential to setting a solid foundation for another good day.

Another essential tool is staying connected with support friends. This element is even more important when going through something stressful and emotionally difficult to process/handle. I'm going through a big one of those right now. You wouldn't know it by reading this blog, because it involves someone I love dearly and I must respect and protect their privacy. Most of my support friends know of the challenge. My boss at the radio station knows. In fact, he asked me today what keeps me from seeking comfort in ice cream?

My answer: Staying connected in positive support exchanges. Because I can remind myself all day long that ice cream doesn't fix anything--but if I keep that thought in the same brain space as the more powerful thoughts to the contrary created by my emotions and stress--and I keep it all exclusive to my head, the more powerful thoughts will eventually win out. Before that can happen, I must call in back up. And it works.

Okay--it's picture time. I had a voice-over session for a special project at a private studio this afternoon. I asked the client to snap some candid shots. I didn't know when she was snapping them--no posing--just me doing my thing, oblivious to the camera.

My head doesn't hold on to this 500 pound-plus image--but it most certainly doesn't see the image of that guy wearing the headphones in the above shot.

I'm not complaining. This is a good issue to have. Ignoring the issue could lead to excessive weight loss. Seeing these pictures is helping me close the gap between old mental imagery and reality.

One of the employees at the Y was nice enough to snap a few more for me tonight. It's very awkward asking for this assistance. Most everyone at the Y is familiar with my transformation, and that helps clarify and make it easier to understand the request, especially after my brief description of the concept. 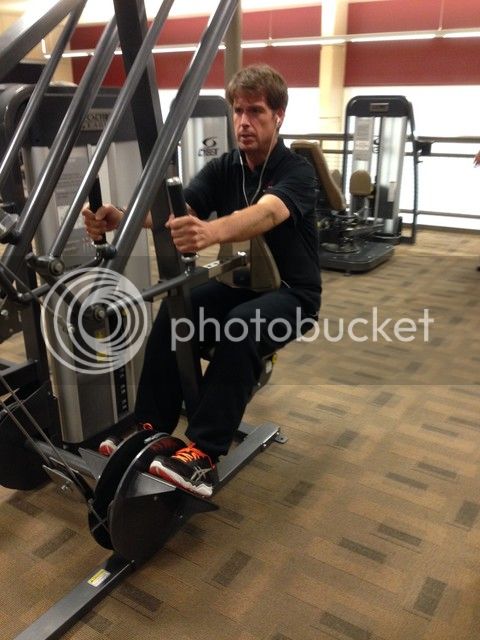 This running thing is very interesting. I've pretty much just started and already I'm noticing progress. Tonight was easier than last night. I'm convinced that I will continue to evolve with practice and I will hit my goal of running that 5k non-stop at the end of September.

I always heard the runners say things like, "it gets easier" and "it becomes addictive" and "you'll be so glad you did this." But I was too busy creating reasons why it wasn't possible for me, instead of exploring the steps making it possible.

It reminds me of listening to people who spoke about their abstinence from refined sugar long before I committed to being abstinent. I simply couldn't imagine ever doing it. I didn't want to do it. I heard their words, I read their blog posts all about the peace and calm that overcomes, the stability, the binge free experiences--and still, my reluctance to try it out for myself, kept me far away. Finally, in my moments of surrender, I let go and followed a path worn by those before me. And I discovered they were right--everything they said I would experience, I did.

A really good support friend shared with me tonight, something Herbert Spencer wrote:

"There is a principle which is a bar against all information, which is proof against all arguments and which cannot fail to keep a man in everlasting ignorance--that principle is contempt prior to investigation."---Herbert Spencer

My open minded investigations are ongoing.