The First Double Day Post and Plenty of Pictures

Thursday was the start of a really busy weekend for me, I mean seriously--I'm literally booked through Sunday night. The madness starts today! I love it, so don't get me wrong---this is living, maybe a little too much, but living like I never could before.

Back in the stand-up days, I had this bit---it totally relied on my 500 pound plus size to be funny, and some other morbidly obese people never laughed---because they knew that I was hurting myself for the laughter that made me feel loved, respected, and totally valued. The bit was about me walking into a Mazda dealership and asking to test drive a Mazda Miata. The bit worked about 97% of the time---it was a guaranteed laugh, and sometimes it became an applause break---it just depending on my delivery and the mood of the audience. Why do I bring this up? Because I took a test drive in a used Mazda Miata today. It was a convertible, but the top was up---and I fit perfectly. It was amazing. I was driving a Miata!!!! This little car is so me right now---I've always wanted to drive a little car, own one, because it would be such an amazing thing. And if you're remotely familiar with my old stand-up material, then you know exactly how meaningful this is to me. It's huge!

I had a full workday today, capped with a five to seven pm remote broadcast from The Ranch Chiropractic Wellness Center. The Ranch grilled homemade authentic German brats. These bratwurst were the absolute leanest brats I've ever enjoyed! Yes, I had a half with a bun and plain yellow mustard--and later had another half a brat minus the bun. I was so impressed with the flavor, despite the lack of fat. It was amazing! But a little hard to calculate the calories...I decided on 225 per. This isn't your typical bratwurst! 225 was an honest guesstimate, yeah---I'm pretty sure.

Dr. Amy commissioned miniature cupcakes with the Ranch Chiropractic Wellness Center logo in icing. These tiny things were the cutest---and seriously, each one had to be about 60 calories. I finally decided on 80, but really---I think that's an over estimate. 60 looks and feels so reasonable.

Kenz is flying into OKC tonight. I plan on meeting her at the airport, although she doesn't know that part. I'm surprising her at the terminal exit. I'm so excited to see her!

I'll add more to this post as I can. In the meantime---I must run! More soon---please, enjoy the pictures!

This morning was met with a nervous energy that refused to stop until late afternoon. It was performance day at the OCTA festival. I'm very happy we had such a wonderful performance on Monday night in front of the Poncan Theatre audience. If we can just do that again, we'll be absolutely fine!

The hotel breakfast was premium stuff. Real scrambled eggs, yeah...you could tell. And a bunch of other things like biscuits and gravy, sausage, and bacon. It's almost boring to write about, you know, how I waltz in and completely, confidently handled that breakfast buffet. I'm really happy where I find my very natural habits. I was hungry, absolutely--but I was picky...some fruit and corn flakes, a little bit of scrambled eggs--even a slice of bacon. I naturally avoided the breads, the gravy, the sausage, the bagels, the cream cheese, the peanut butter...naturally avoided. It isn't a struggle to make these choices. I'm not missing out on anything. I do not feel deprived. I enjoyed what I wanted and nothing I didn't. I love the feeling I get after making good choices so naturally. I often remind myself later, hey--you didn't even have to think about those choices, way to go!

The festival this afternoon was a very interesting experience. Everything is timed. You have ten minutes to set up, an hour to perform, and ten minutes to strike the set. Any violation of these limits and you're disqualified from the competition. We had a bunch of extra time to play around with--we even considered positioning the set in slow motion, for sheer entertainment value. We didn't, but I think we should have.

Before we took the stage, I gazed one last minute into the dressing room mirror. My thoughts go to my 505 pound days, where something like what I was about to do would have been completely unthinkable. Oh, I'd secretly dream about it, but actually doing it? Not as a 505 pound man--no way. But here I was...in a dressing room, with a lead role in a comedy, waiting for my moment under the lights. This is living.

Kenz and her dad Wayne made the performance too! I was so happy they could be there, and really---it didn't make me any more nervous than normal. I was confidently cool by the time we took our places. I'm so glad I couldn't see the audience very well through the lights, but they were there---the laughter and applause let us know.

After the performance, Kenz, her dad, and I enjoyed the Golden Palace Mongolian BBQ and Chinese Buffet. Wow, this place was crazy good. And it wasn't bad at all. It sounds horrible, and I guess it could be if you made it that way, but really---the choices are there for the choosing. I picked my veggies and meat and then a cook takes those ingredients and cooks them on a large rotating platform. It's a site to see really...and it ended up being a plate that wasn't too much at all.

I grabbed a few things from the chinese buffet, an egg roll and a few other favorites, and enjoyed my meal. An experience like this isn't about being exact on the calorie count, because really---it would drive you crazy if you tried to be exact, because you just couldn't. It's about trusting yourself, it's intuitive, it's normal portions, it's smart choices. It's looking at the options and making responsible decisions you can be proud to own. It's drinking the water, it's pushing the plate away and realizing that you're satisfied--not stuffed. It's walking out of that place knowing that it was handled in the best possible way--and feeling absolutely incredible for the experience.

I've really allowed this trip to change my writing dicipline---and that really bugs me, but it shouldn't. This blog is so important to me, and what it's done for me over the last 683 days is nothing short of incredible---so missing a post, or catching up later by having this "double post" day, really bothers me. Then I remind myself that it's OK because I'm living the fruits of my consistent dicipline...and wasn't this the goal from the beginning? To live to the fullest? And sometimes that means not being able to post the page on my regular schedule. I'm fine. Everything is absolutely fine!

The dash of the Miata--with me behind the wheel...It felt amazing to fit in that little car! And it was so much fun to drive! Zoom Zoom Zoom! 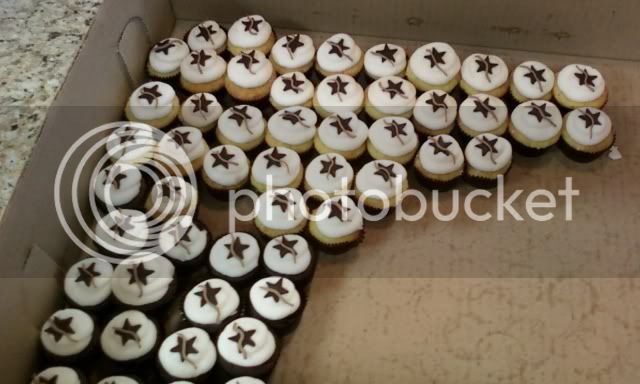 We Rock the water challenge all day and night!

Another picture from the play during festival...

We're having a blast together!

With Stephanie Williams as "Wanda" and Morgan Ham as "Marsha"

With Andrea Storm--a PEWC member, Lose To Win Member, and now 30 pounds lighter!!! Way to go Andrea!! Andrea plays the waiter in "Wanda's Visit," and has one of the most memorable lines in the entire play!

With Tom Cowley, founder of ReAct. Tom's in costume for a fantastic walk-on role in "Wanda."

With Bobbie Carson--President of The Ponca Playhouse

With Morgan Ham
Posted by Sean Anderson at 1:59 AM